The Difference Between Moles and Freckles 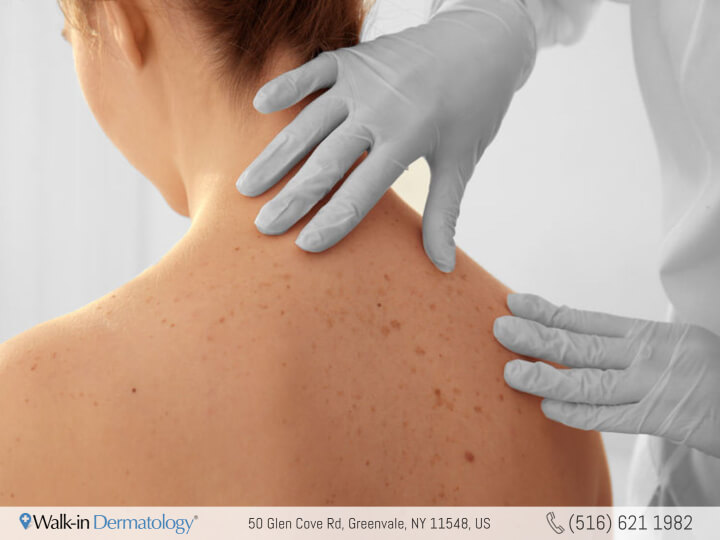 Freckles and moles are words often used interchangeably, but they aren’t the same. So, what’s the difference between them?

Moles are raised skin spots often appearing alone or in groups, whereas freckles are clusters of flat skin spots that are typically lighter in color. In this article, we break down the differences between moles and freckles to illustrate what makes a mole different from a freckle, as well as highlighting some tell-tale signs that your mole should be checked by a dermatologist.

What is a Mole?

Skin moles are a collection of melanocyte cells that often appear as black or brown spots. They typically appear alone but can also appear in groups. Most moles are “raised,” which is their distinguishing characteristic. With time, moles may shift in shape and dimension and can change color or raise above the skin.

Moles are considered temporary growths because they can appear and disappear. Disappearing moles often begin as a small flat spot, and become slightly raised overtime, then they can get pale and disappear.

Disappearing Moles: What do they Mean?

A change in the appearance of a mole is a common sign of possible cancer, but what does it mean if a mole disappears? Mole disappearances are not always linked to skin cancer. Other triggers may include:

If you notice that your mole is changing in shape, color, or texture, it’s always a good idea to get it looked at by a dermatologist. They can perform tests to understand the underlying reasons causing your mole to change in appearance.

There are three common types of moles, including:

What is a Freckle?

Freckles are small clustered spots on the skin. More often than not, freckles appear after prolonged sun exposure, as the skin produces melanin triggered by exposure to UV rays. Unlike moles, freckles almost always appear in groups and rarely alone.

Freckles generally have the same appearance but can differ in color depending on the person’s genetics and complexion. For instance, freckles may appear reddish for some people and light brown for others. Regardless of the specific color, these are typically darker than the rest of the surrounding skin.

There are two categories of freckles:

Moles vs. Freckles: What’s the Difference?

Moles and freckles are two of the most common skin growths. One of the easiest ways to distinguish between the two is to simply feel the growth’s surface.

Moles are often raised whereas freckles are generally flat. Looking at the pigment can also give you an idea as to whether you’re looking at a mole or a freckle: the former is significantly darker, while the latter is typically only a few shades lighter than your skin color, and often appears reddish or light brown. Moles generally appear as one spot, whereas freckles appear in distinct groups.

The more significant difference between moles and freckles is that freckles rarely develop into skin cancer. The overproduction of melanin, which causes freckles to appear, often only changes the skin on a surface level.

On the other hand, more serious growths like moles can be symptomatic of cancer or another disease. Moles that are larger than a pencil eraser should be checked for cancer.

Can Freckles Turn Into Moles?

Freckles and moles are two different types of skin growths. Freckles occur as a result of sun exposure or genetics, whereas moles appear after skin cells develop into a cluster instead of spreading out into the skin. Ultimately, the mechanisms involved in the appearance of both are different and separate, meaning freckles can’t turn into moles and vice versa.

Signs You Need to Get Your Skin Checked

Freckles are rarely harmful and usually require no medical treatment. The appearance of freckles can be lightened with less sun exposure or proactive skin care involving broad-spectrum sunscreen with 50+ SPF.

Moles on the other hand, are known to develop into cancerous growths. Here are some signs that you should get your mole checked for skin cancer:

Get Your Moles Checked at Walk-in Dermatology

Worried that your mole might be signaling something serious? At Walk-in Dermatology, we can help.  Call us or book your appointment through our website to get the answers you’ve been looking for.